When I left my job at VMware, I had no idea what I wanted to do next.  I knew I wanted to work with early stage companies and I also knew I wanted to do something technical, but beyond that I was’t quite sure what the perfect role for me would be. I had just relocated my family from a seaside town to Cambridge and was in the midst of a major home renovation so I decided to focus on rediscovering the technical community in the Boston area as a first step.  What a pleasant surprise it was to me to find that while I had my VMware “blinders” on for the last eight years, the startup scene in Boston and Cambridge had exploded.  There was a new crop of venture capitalists, start up accelerators like TechStars and MassChallenge were gaining traction, and the nation was starting to take notice that Boston was a burgeoning community for entrepreneurs.  Of course, Boston’s entrepreneurial roots are strong with some of the earliest of tech companies (e.g., DEC, Data General and Polaroid) to more recent “legacy” successes like iRobot and Akamai.  Lest we forget, Facebook got its start here too.  So I don’t know why I was so surprised that another crop of greatness was brewing in this city I’ve called home my whole life.  Now, what to do?  That was the question!

Step two was to plug into the scene.  My friend Scott Kirsner, a local reporter for the Globe and entrepreneur himself (Scott started Innovation Leader as well as several important startup events in Boston like the Nantucket Conference and Future Forward), introduced me to a ton of local angels.  In turn, these angels introduced me to a bunch of entrepreneurs in the area who had either just started new companies or were looking for co-founders.  I also got plugged into TechStars and MassChallenge as a mentor.  It was through my connection at MassChallenge that I got paired with a stealth company that was working on a new way to help women grow and be retained at large companies.  Their concept was to systemically organize an advisory board for high-potential (HP’s) employees via a Match.com kind of algorithm.  Seasoned employees or members of the program outside a company would sign up to advise HP’s based on certain expertise they could offer and the HP’s would create goals that matched to these expertise.  The hope is that by having the right experts assigned as a “board” to these HP’s, they were more likely to grow at their company and therefore have a longer tenure.

I liked this concept a lot and thought about how everyone should have a board like this – no matter what stage their careers were in – and that’s when my personal advisory board idea came to light.  I decided that before I could start my next gig, I needed a solid group of people to serve as my advisory board.  My requirements for this board were as follows:

Once I decided the criteria for my board, I then wrote a one-page business plan for me.  Not for a new business or opportunity, but for what I wanted to do to in my next phase of work.  I kept it really high level in terms of the type of work I wanted to do (at the time, mostly advising and investing in startups) and what I didn’t want to do (work with jerks or be a “consultant”).  Then, I set guidance for my Personal Board of Advisors (PBA) in terms of how I wanted to leverage them:

…and how they could leverage me:

I also included some Rules of Engagement: 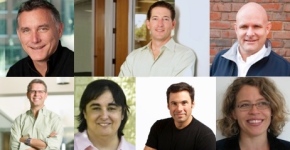 Feeling lucky to have this group advising me!

The net result of setting up my PBA was better than I ever expected.  I have seven amazing individuals who I can go to when I need advice whether it’s for a specific project I’m working on or just career advice in general.  I feel like they have my back and I absolutely have theirs.  I have since collaborated with some of them on specific projects and several have reached out to me to connect with people who could use my help or advice or to help them with a project they’re working on directly.  I never had a PBA meeting (we tried to do a lunch once, but they are all so busy it was impossible to get everyone together!), but I don’t think it is really necessary.  They each know each other in some way – some better than others – and there’s no competition/tension between them (that was lucky on my part!), but the real benefit is the 1:1 time I get with each of them on demand.  Sometimes a quick text or email, sometimes a lunch or a cup of coffee. I know they are each willing to help me out whenever they can and that made a huge difference for me as I immersed into the local tech scene over the past year.

I had a great year getting to know the startup community in Boston and have since taken a permanent position at Blade as an EIR.  You can read more about that here.

Thinking about setting up your own advisory board?  Comment below with questions about how best to set one up!  Or share experiences you’ve had doing the same.

One thought on “Setting Up Your Own Personal Board of Advisors”

My Past Blog Posts