I’ve worked in tech for my entire career and I love it. I get to work with people who are really smart (and very cool) and I get to build things that people actually use. Where did my interest come from? It all began in an office a long time ago… 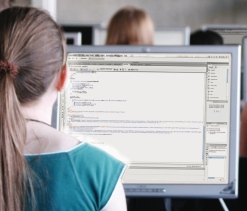 projects to do on his fancy Radio Shack TRS 80’s. He’d go through these huge stacks of Byte magazines and hand me cool programs he wanted to use for his civil engineering work. I’d sit in front of the “trash 80’s,” pop one of those huge 5+ inch floppy discs into the computer and start to code. The instructions were simple: Enter the text on a particular page and type “run.”  If there was an error, it was up to me to debug until the program ran successfully.

At eight years old, I had no idea that I was coding or that what I was doing was a rare activity for a girl. I liked how it felt to click on the keys. Debugging was like solving a puzzle and it was so satisfying when I finally got program to run. I was learning a new language and soon I could translate what the code was telling the computer to do. I was hooked.

As a studio art major in undergrad, I took computer graphics and Computer Aided Design (CAD) as electives. I can remember spending hours in the computer lab with my fellow students as we hacked away in BASIC to make little stick figures jump across the screen. We would fantasize about how cool it would be to get a job where this was actually what you got to do all day (If we had only known that Pixar was brewing out West!). Before the days of simple LANs and mainstream internet, I would work late into the evening with my male colleagues writing code in the lab. But not once did it ever occur to me that as a woman, I was a minority. All I knew was that I was alongside people who were as passionate as I was about what we were doing. That was all that mattered. And it still is.

Working with people who are passionate has been a fundamental driver for my career.  It concerns me that there are not enough women taking an interest in this field. Lenore Blum’s research at Carnegie Mellon demonstrates that women are more inclined to stay within the field if there are female professors and student role models to learn from and emulate. While I agree that we need more women role models in the field, and I will always try to be one myself, I also believe that if we inspire our children early to be creative thinkers who are comfortable with, and have access to, technology (beyond their smart phones and iPads), they will pursue careers in the field because it’s just plain fun.

We need to show children (and their parents) that computer science is an interesting and cool career path and not just an option for nerdy boys. We need to integrate lessons on programming, networks and clouds into daily curricula because these are basic tools one should possess. Children learning about how our bodies work, science works, or how to do math equations should be equally educated in the history and workings of the technology they use and rely upon every day. This is how we can diffuse the “nerdy boy” stigma associated with computer science. This is how we can better prepare our children to be innovators of the future.

I have three daughters who are all tech savvy. It’s unclear which side of the nature vs. nurture debate that falls under but regardless, technology has been a part of their lives since they were born. They see it as an enabler for a variety of fields and not just the basis to become programmers. With two who are artists and one who is a musician/budding architect, their days are filled with high tech sound mixing, computer graphics and CAD tools. It is a part of their daily lives. They are well past making a stick figure jump across the screen and blow me away with what they can do with the technology at their fingertips.

As we kick off CS Ed Week in MA this week (December 8-14), hundreds of young people and their parents will be checking out Hour of Code at their schools or with local community groups. The purpose is to provide access to coding and demonstrate how fun it can be. My hope is that somewhere a young boy or girl will be as excited about technology after that hour as I was when I was in my dad’s office years ago, and still am today.

Please tweet or post your experiences during CS Ed Week using the #HourOfCode and include @Masstlcef if you’re in MA!

My Past Blog Posts